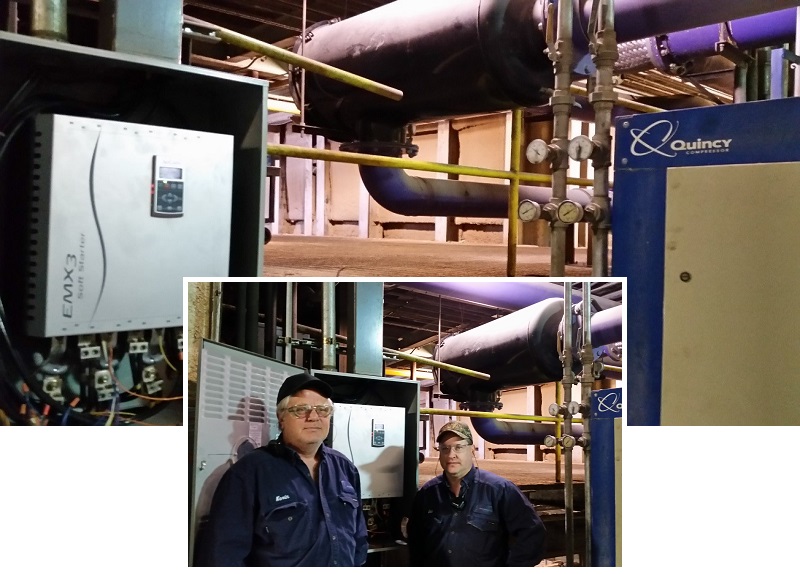 Issue: Repair of competitor’s soft starter that had failed was one option.  But replacement with AuCom’s EMX3 Heavy Duty soft starter chassis unit was a faster and more economical solution.  Even then, this ‘hard to start’ compressor was a challenge!!

Once the retrofit was complete the service shop contacted AuCom North America for support in getting the unit started. AuCom’s Kevin Rice went on site and discovered that the supply line voltage was dropping from 480V to 418V during start. This voltage drop only allowed the motor to draw a little over 1000A before tripping out the starter. Changing the taps on the transformer increased the voltage to 494V and limited the voltage drop to 425V, allowing the motor to draw about 1350A during start.

Even then, this voltage drop would not allow the motor to reach full speed. AuCom’s solution was to use the EMX3’s unique ‘Power Thru’ feature to get the motor started. Using the programmable relay in the starter and a simple addition of jumper wires to the control terminal strip was all that was needed. In no time the system was up and running.

Although it took 3 shifts before the problem was solved, the customer was still impressed. They said the original installation (of the competitor’s soft starter) took over six-months to get it running right!

“After 30 years in this business, I thought this was going to be the first time I would not be able to get the motor going”, said AuCom's Kevin Rice. After the successful outcome he said proudly, “I don’t think there is any motor that an AuCom EMX3 soft starter can’t get going!”.

Welcome to the AuCom newsfeed