Twenty two EMX4e soft starters have just been commissioned by Fuji Europe in Nice, France as part of the Nice Tramway expansion project.

The starters are responsible for the control of ventilation fans in the 3.2 km tunnel stretch of the new Line 2 Ouest-Est (T2) section of the Tramway.

In case of fire in the tunnel, the starters will work together with Fuji variable speed drives to channel smoke out of the tunnel and manage the oxygen supply. 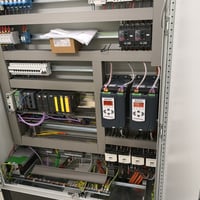 The Fuji team encountered an insulation issue when commissioning the first two fans, which was later discovered in the cables, but damage to the system was prevented by the soft starter by an immediate trip.

Subsequent fans were commissioned in no more than two minutes, leaving the customer undeniably impressed with the AuCom EMX4. They also greatly appreciated the ease with which parameters could be set using the EMX4's USB functionality and the easy access to service support offered by the AuCom Pocket Technician app.